The name Andaman brings to mind memories of the dreaded penal settlement of Kala Pani, Blue skies, vast stretches of pristine beaches shimmering with azure waters and water sports such as Scuba diving and Snorkelling. Andaman and Nicobar islands are a group of islands which are located at the juncture of Bay of Bengal and Andaman Sea. It has always been an exotic destination ever since I heard about it. Though it is a union territory of India, it is closer to Myanmar and Thailand. The only airport is at Port Blair which is the capital. If the weather is turbulent, the planes land at the airport in the neighbouring country of Thailand as it is closer than mainland India :P Since Andaman is a lot more to the east than the rest of India, daylight kicks in real early on the clock as IST is a single timezone for the whole of India. 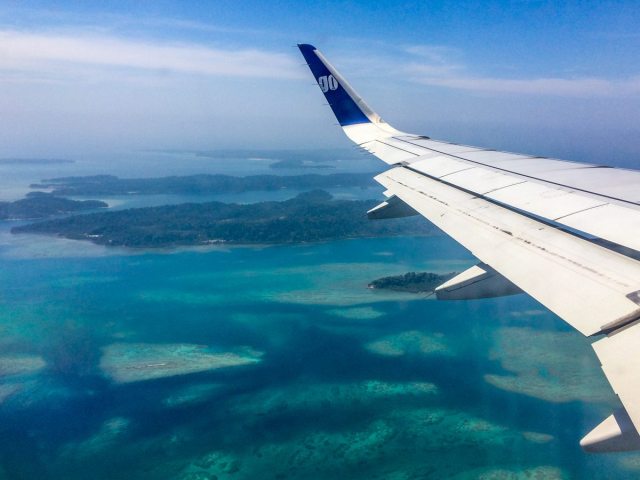 Little known fact: Andaman has been inhabited for thousands of years. It was part of the Chola empire as a strategic naval base against the Srivijaya empire of Sumatra in the south east. However, very little seems to be known of the involvement of the indigenous tribes of Andaman with the Chola empire. The indigenous people of Andaman seemed to have lived in substantial isolation till the eighteenth century when the British arrived here to set up the penal colony for which the island attained notoriety as Kala Pani.

Today the island is inhabited by people who originally hailed from different parts of mainland India. A reasonable number of them are Bengalis from Bangladesh. They were settled here by the Indian Government when they came over to India as refugees during the tumultuous times before Bangladesh’s independence from Pakistan in 1971. The indigenous tribes still occupy some parts of the island but are seldom encountered in the regular tourist trails. In fact a lot of the areas where the most secluded of the tribes still live are off limits to outsiders with access being controlled by the Indian Government and Navy.

Port Blair is the capital of Andaman and Nicobar Islands. It is a laid back city and serves as the base for a trip to the islands. Port Blair is well connected by air to the mainland. You can also get here on ships from Chennai, Kolkata etc. A day or two can be spent hopping around the museums (Anthropological Museum, Samudrika Naval Museum and Fisheries Marine Museum), Cellular Jail, Chatham Saw Mill and the nearby islands. Aberdeen Bazaar is the main shopping area in Port Blair. Most of the shops and restaurants are found here. 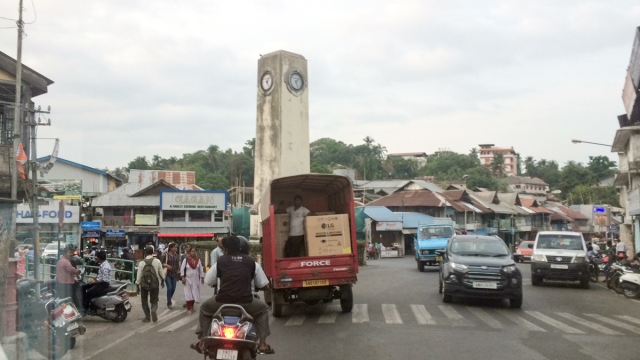 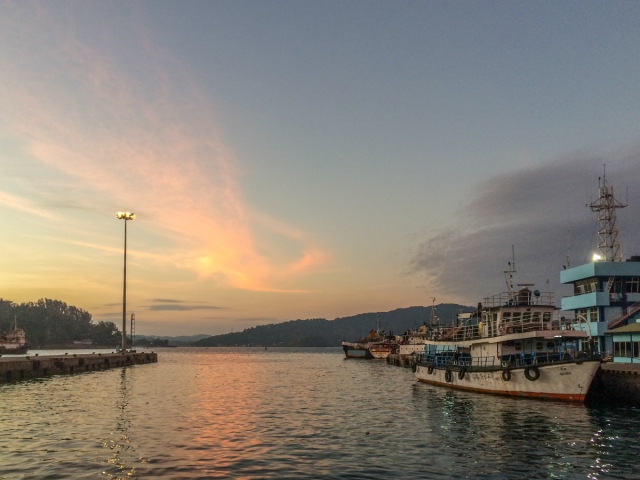 Andaman served as a penal settlement primarily for political prisoners who were subjected to torture and harsh treatment during the British rule. The convicts were used to set up the British colony in the island. The prison set up at the island was called Kala Pani by the Indian prisoners and Sazaa-e-Kala Pani was dreaded by everyone.

The islands were occupied by Japanese during WWII who drove out the British. The jail was used for housing British prisoners. During this time Netaji Subash Chandra Bose visited the islands and raised the flag of Indian Independence, making it possibly the first place in current independent India where the Indian tricolour fluttered. After WWII the islands returned to the British. The penal settlement was abolished when India gained independence in August of 1947.

The jail was constructed by the prisoners themselves who were sent to Andaman and it took around 10 years to be constructed. It was built in the shape of a starfish with seven wings radiating from a central tower. Each wing had three floors. The cells of each wing were designed such that they faced the back of the adjoining wing thereby preventing communication between prisoners of two wings. Solitary confinement was a tactic used by the British to ensure the isolation of political prisoners and revolutionaries from each other. 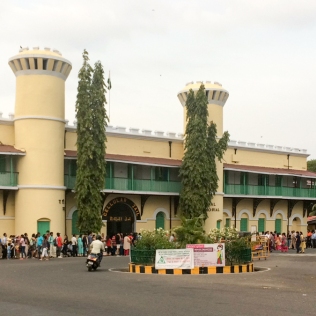 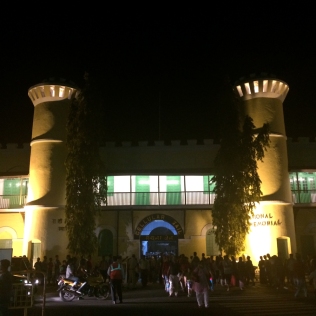 The hardships that the inmates were subjected to was often severe and unbearable. The inmates were made to extract oil from coconuts manually which was a gruelling process. It was impossible to extract the expected quantity of oil within the specified time and punishment which included brutal flogging was meted out for not completing the work. Some of the other tasks assigned were rope and coir making.

One of the most popular inmates of the jail was Vinayak Damodar Savarkar well known as Veer Savarkar, a freedom fighter from Maharasthra. Both he and his brother Ganesh Damodar Savarkar were imprisoned here in different cells. The design of the prison and isolation of prisoners ensured that the brothers were unaware of each other’s presence for two years.

David Barry was probably the most notorious jailer in terms of torturing the prisoners. Mass hunger strikes were carried out by the inmates protesting against his brutality in the 1930s. The British officers tried force feeding due to which three freedom fighters died. At this juncture, Mahatma Gandhi and Rabindranath Tagore intervened and the Government decided to repatriate the political prisoners from here just before the outbreak of WWII.

After Independence two of the wings of the jail were demolished. There was public outcry that the monument be preserved as a national memorial to independence. Today only three wings and the central tower remain. A Government Hospital has been established in the rest of the premises.

The Cellular Jail is a must visit place for anyone visiting Andaman. The place evokes profound patriotism and one cannot miss feeling a lump in the throat upon going around. Despite its macabre past, the place radiates charm and serenity now. A museum has also been set up near the entrance displaying paintings and photographs. The museum also contains a model of the entire Cellular Jail as it was originally built. Guided tours of the jail are available during the day. Light and Sound shows are conducted in the evenings in Hindi as well as English. 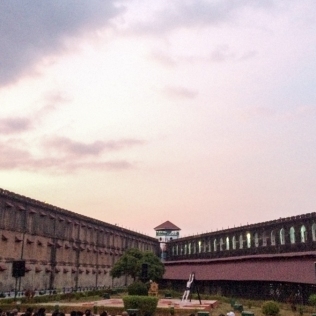 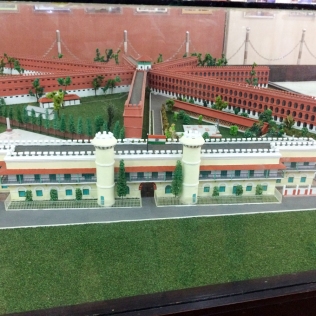 There is an eternal flame burning in memory of the martyrs who dedicated their lives for the sake of freedom as we enter the premises after visiting the museum. The gallows where prisoners sentenced to death used to be hung can be seen. The mess where meals were cooked is next to the gallows. The work sheds lie in the middle of the premises. Various models have been displayed to depict the kinds of work that the prisoners did. 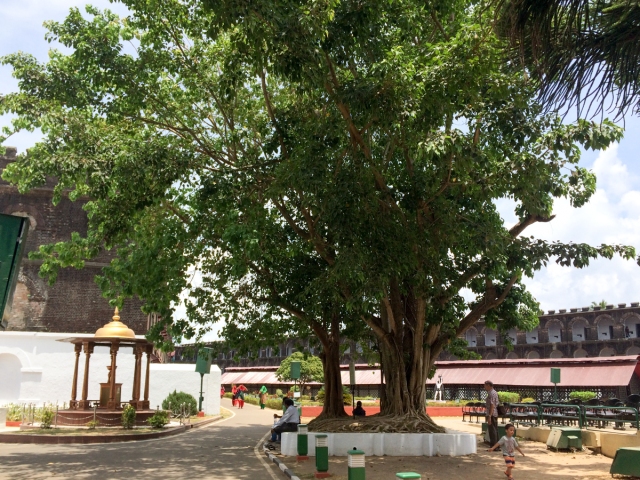 Inside the Cellular Jail

The long corridors of the prison which have been a mute witness to the gruesome past reverberate in silence today. Veer Savarkar’s cell has been marked out and is one of the stops during a visit here. The airport at Port Blair is also named after him. Boards listing the names of prisoners have been kept. Upon reaching the top of the central tower, one can see the starfish shape of the structure and get sweeping views of the entire place. The neighbouring Ross island can also be seen. 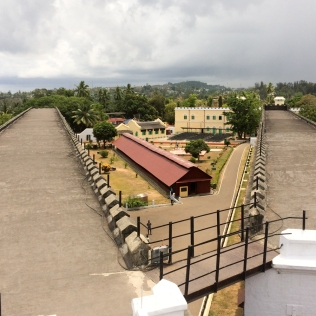 View from atop the Cellular Jail 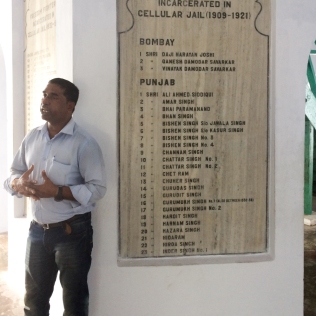 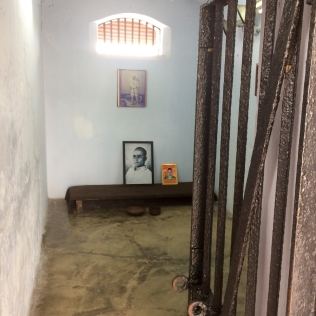 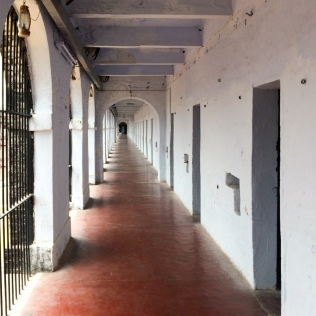 One of the corridors of Cellular Jail

A park right across the road from the cellular jail houses statues of prominent freedom fighters who had been imprisoned here.

While the prison was set up on mainland, the neighbouring Ross Island was where the British colony was set up. Prisoners were used for clearing the island and constructing buildings. The island served as the administrative headquarters of the British for almost a century before being occupied by the Japanese during WWII. An earthquake in 1941 destroyed most of the buildings on this island and led to it being abandoned. 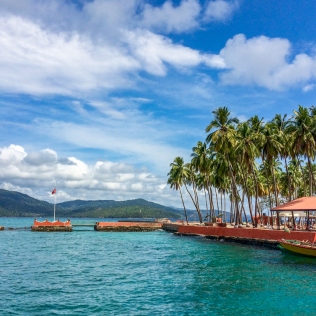 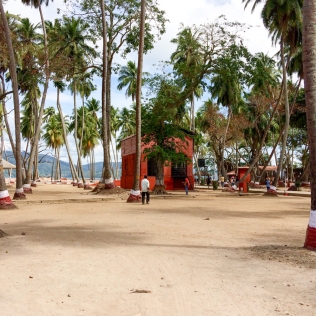 Today all that can be seen are the remains of the opulence and grandeur of the colonial era. In its heydays Ross Island was referred to as ‘The Paris of East’. Ruins of the hospital, bakery, Rosary Church, Chief Commissioner’s residence, stores, swimming pool, tennis court, water treatment plant, barracks etc serve as a reminder to the past. Nature is slowly taking over with most buildings being covered by creepers and roots of trees. Deer can be seen roaming amidst the ruins. Today the island is managed by the Indian Navy and no civilian settlement is allowed here by the authorities. 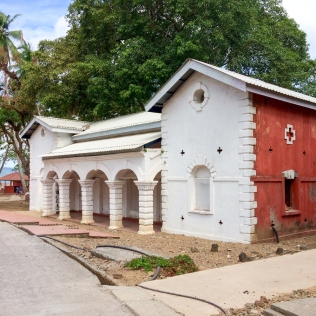 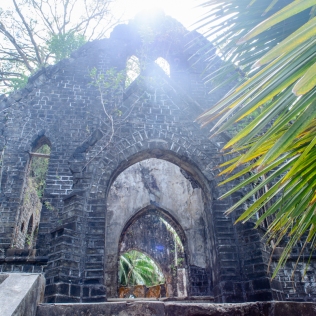 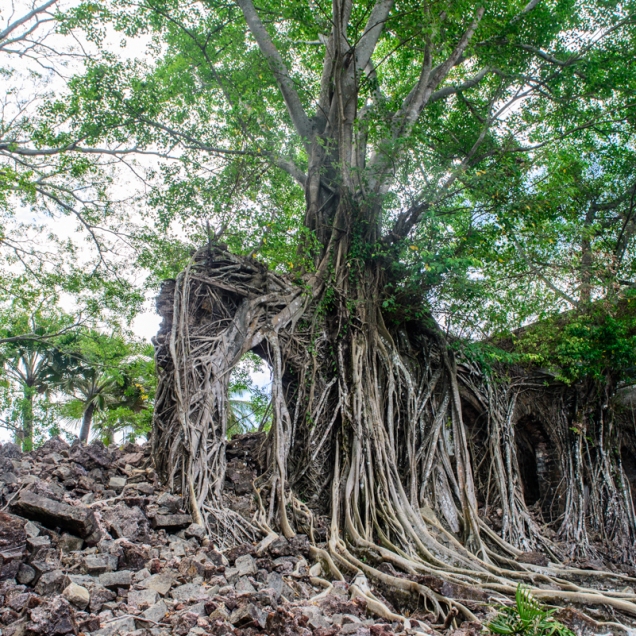 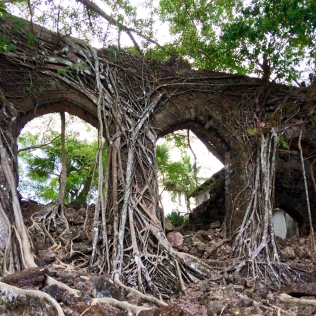 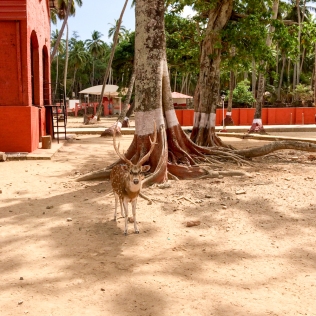 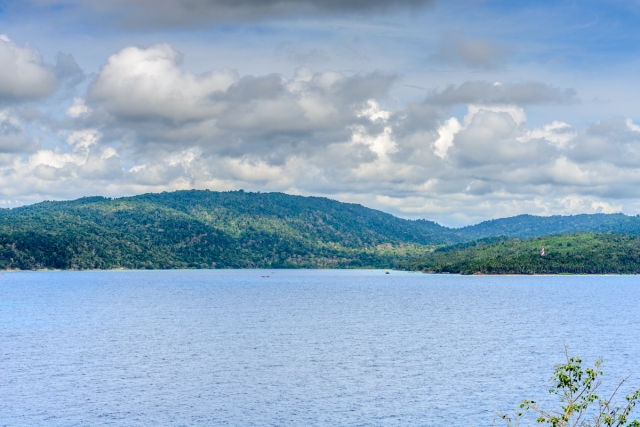 Ross Island can be reached by a fifteen minute boat ride from the jetty of the Water Sports complex in Port Blair.  Electric vehicles are available on the island to go around. The island can be covered by foot too. Light and Sound shows are held here during evenings.

This is one of the oldest and largest saw mills in Asia. It is located on Chatham island which is 11 kms from Port Blair and can be reached by a road bridge. The mill was established by the British in late nineteenth century to meet the timber requirements for construction purposes. The mill is still operational and maintained by the Forest department. 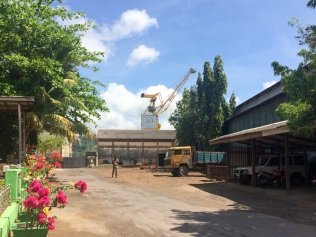 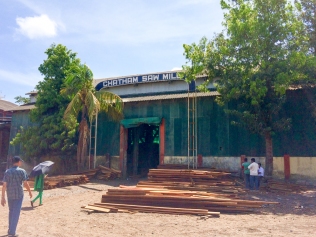 The mill was affected by bombings during WWII which resulted in the creation of a huge pit in the premises. Today the pit is filled with water.

A museum has been set up inside the premises showcasing samples of wood carvings, furniture and wooden showpieces. A board depicting the two dozen varieties of wood found in Andaman has also been kept here. 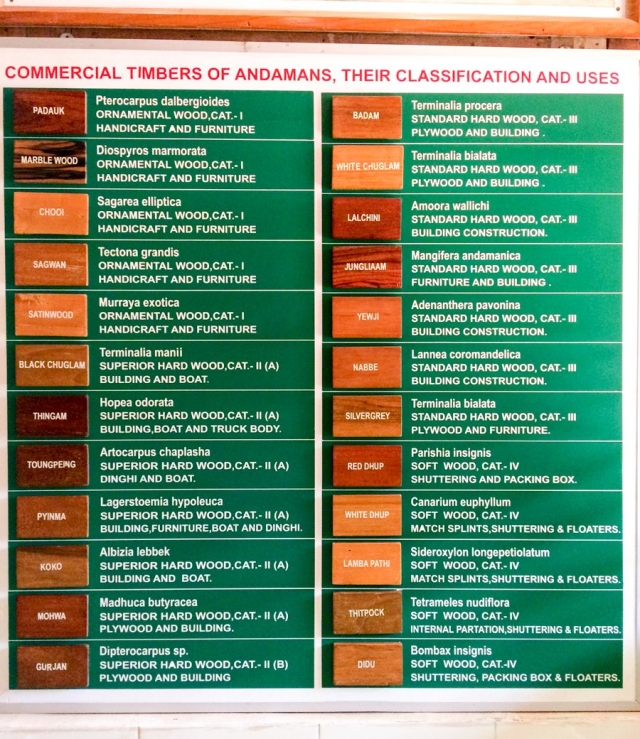 A guided tour can be taken to observe the operations of the mill. The different phases that the wood is subjected to right from the time it is ferried across to the mill till it is sorted, cut, stored and transformed into wooden planks can be seen here. One may find the guides here to be not very enthusiastic and mechanical. Nevertheless the mill is an interesting stop for the history buffs. 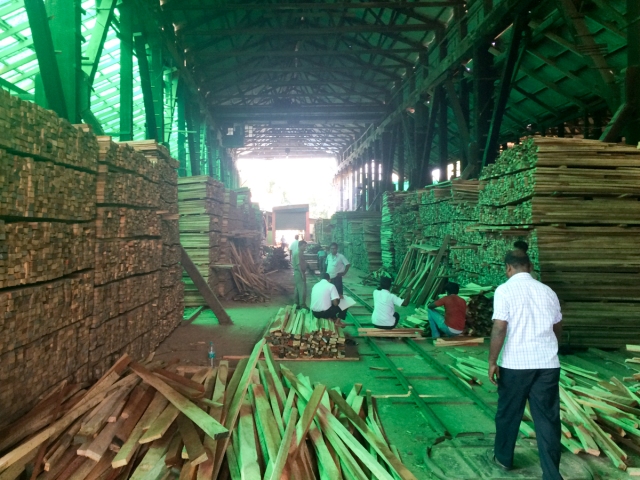 The wood is piled high at Chatham Saw Mill

Chidiya Tapu Beach is famous for its gorgeous sunsets and birdwatching. It is at the southern end of the main island, 30 kms from Port Blair, and it takes an hour to get there. The ideal time for birdwatching here is early in the morning. The terrain changes drastically in the last leg of the drive. The forest is very dense here and thats why it is a birdwatching hotspot.

A visit to Chidiya Tapu can be combined with a stop at the nearby Mundapahad Beach. There is a checkpost here where the records of people visiting are maintained. This beach offers beautiful views of the surroundings. Driftwood can be found scattered all across the Mundapahad Beach. Most of the tourists spend quite a bit of time here. 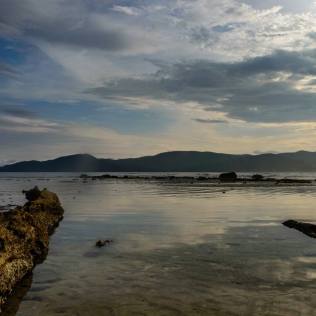 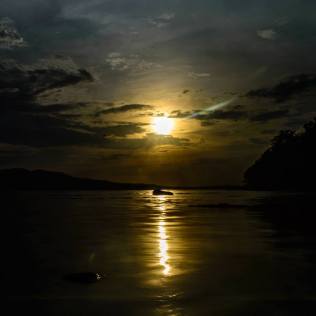 The sunset at Chidiya Tapu beach can be quite a sight and the stones that crop up given the low tide make it a wonderful location for sunset photography. A tip. Wait a little post the actual sunset too. You will see gorgeous colours! 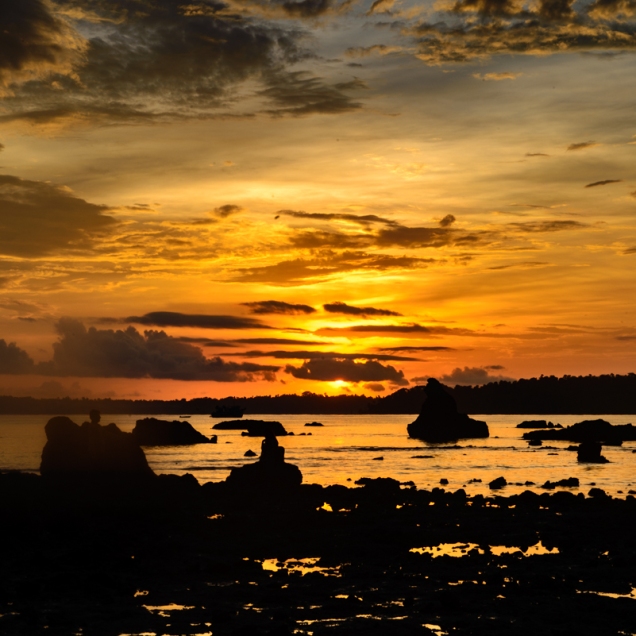 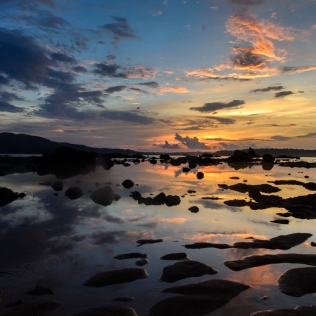 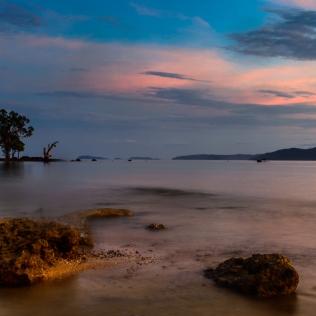 A little after sunset at Chidiya Tapu

Named after a British General Sir Henry Havelock, who served in India, Havelock island is one of the largest islands in South Andaman. This island is a must visit and figures in most of the typical itineraries to Andaman. Among others, Havelock is home to the world famous, picture perfect & gorgeous Radhanagar Beach!

Neil Island is a smaller island compared to Havelock in Southern Andaman. It is named after a British Brigadier called James Neill who fought on the side of the British in the sepoy mutiny of 1857. The Natural Bridge and Coral Reef here are unique and one of a kind!

All this and much more on Havelock & Neil Island in the next post.