Amritsar colloquially called Ambarsar is a heritage city in the state of Punjab in North Western India which is steeped in history and culture. It lies on the stretch of Grand Trunk Road connecting Delhi to Lahore.  It is the holiest city for Sikhs. It is home to the Harmandir Sahib popularly known as Golden Temple. It is also well-known for its rich cuisine and shopping.

It had been on my wish list for quite a while and I got an opportunity to go there this year during Dussehra. For the trip to Dharamshala in September this year, we figured that Amritsar was a very meaningful option from both distance and costing perspectives. The other options are Chandigarh – little further than Amritsar from a distance perspective – and Gaggal (Dharamshala), flights to which were very expensive. 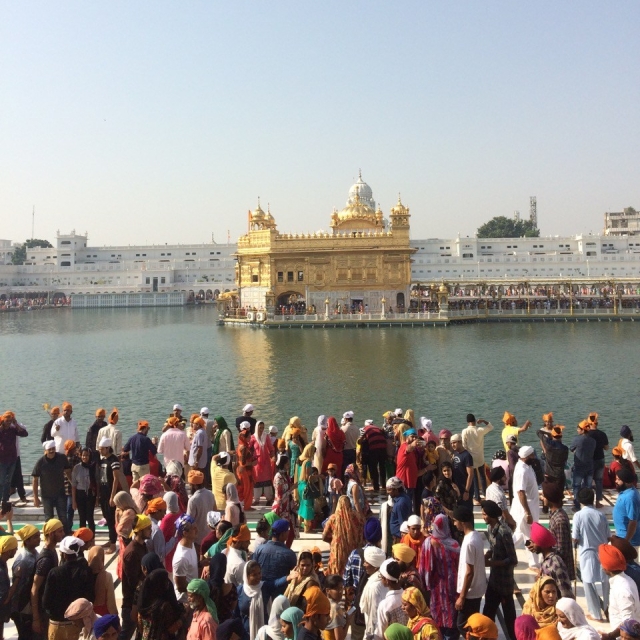 Golden Temple in the morning

Amritsar was founded in the late sixteenth century by the fourth Sikh guru, Guru Ram Das. He settled here first and the place was known as Ramdaspur. The Golden temple was constructed after some time around a man-made lake that he had completed. The old city area of Amritsar has narrow streets which date back to the seventeenth and eighteenth centuries.

The infamous Jallianwala Bagh Massacre took place in the heart of the old city in 1919. Amritsar is located very close to the border with Pakistan (around 30 kms from the Attari-Wagah Border). Due to this Amritsar, along with Lahore, faced some of the worst communal riots during the partition of British India into India and Pakistan.

The Harmandir Sahib, popularly known as Golden Temple is the holiest Gurudwara for Sikhism. It is very popular amongst tourists from all over the world and supposedly attracts more crowds in a day than the Taj Mahal. It is an open house of worship for all people irrespective of their caste or religion. The temple has been nominated as a UNESCO World Heritage Site but the application is still pending. The place should be visited both during the day as well as night to appreciate its beauty and tranquility. It is quite a spectacle when lit at night!

The fifth Sikh Guru Arjan requested Sai Mian Mir who was a Muslim Pir of Lahore to lay the foundation stone for Harmandir Sahib in 1589. The temple has been built around the man-made lake that was completed by Guru Ram Das who founded the city of Amritsar. The holy book of the Sikhs, the Adi Granth (which later became the Guru Granth Sahib)  was placed inside the temple. The place has been rebuilt several times over the centuries as it was targeted and destroyed by the Mughal Empire and the Muslim armies of Afghanistan. In the early nineteenth century it was rebuilt using marble and copper by Maharaja Ranjit Singh who founded the Sikh empire. He also got the sanctum overlaid with Gold foil which led to the name ‘Golden Temple’.

The temple complex has four entrances and a circumambulation path around the pool. Apart from the sanctum the complex also houses the Akal Takht which is the chief centre of religious authority of Sikhism. The Langar of the Golden Temple, which is a community run kitchen where simple vegetarian meals are served to all visitors without any discrimination is considered one of the mega kitchens of the world. There is also a clock tower, museum and offices of the Gurudwara committee. Around one lakh people visit the place every day.

The Guru Granth Sahib is seated inside the sanctum for the greater part of the day. It is carried in a palanquin every night to its bedroom in Akal Takht with elaborate ceremonies. This ritual is known as Sukhasan which translates to comfort or rest position. A similar ritual called Prakash which means light is performed at dawn when the Guru Granth Sahib is carried back to the sanctum amidst chanting and bugle sounding.

Before entering the Golden Temple premises, you will need to remove your footwear. Footwear can be left at the footwear room where a lot of Sikhs perform Seva by managing your footwear for you. Every person entering should cover their heads as a token of respect for the Guru. The ladies can use shawls or stoles if you have them. There are also huge bins just outside where people deposit their used scarves which you can then pick from and cover your heads. Around the Golden Temple premises, you will find a lot of people selling scarves too. With your head covered, you can then step through a pool of water at the entrance to ensure that you enter the premises after having cleaned your feet. 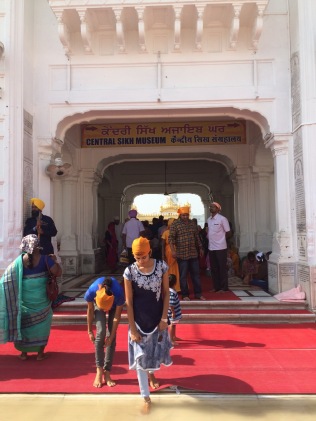 Dipping the feet in the pool of water

A new guard washing his feet before entering

Guards at the entrance

One of the three Ber (Jujube) trees inside the complex 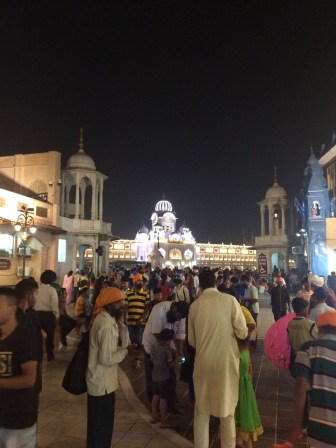 Typically pilgrims make a circumambulation around the lake in clockwise direction before queuing up to enter the sanctum. In the sanctum, the Guru Granth Sahib is continuously recited by the Granthis. On days when the crowds aren’t too much, one can spend some time sitting around here and listen to the recitation. Sitting in the middle of the lake listening to the recitation can be very soothing to the soul! Even to those of us who may not understand the meaning of what is being recited. When you leave the sanctum area and get back to the area around the lake be sure to collect the Khara Prasad, that is ladled out by volunteers to everyone. Around the lake you will also find volunteers handing out drinking water to anyone who needs it. Of course, the langar is an experience by itself!

Just outside the sanctum 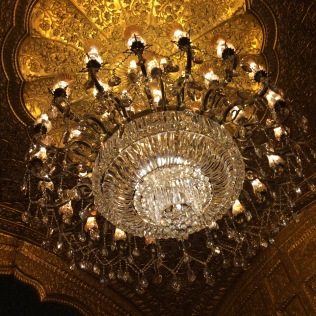 An exquisite chandelier outside the sanctum

Crowds queued up to enter the sanctum

Interesting tidbit: A simple book which can help in understanding important facts about the Golden Temple and Sikhism which can be read before a visit by both adults and children is ‘Amma Take me to Golden Temple’ by Bhakti Mathur.

Jallianwala Bagh is a public garden tucked away in the historical old city along the path leading to Golden temple. Today it serves as a memorial dedicated to the gruesome incident of Jallianwala Bagh massacre of 1919.

Thousands of people had gathered in the garden on the day of the Baisakhi festival for a peaceful protest meeting against the British. General Dyer reached the spot with his troops when the meeting was in progress and had all the exits blocked. He then ordered his troops to fire indiscriminately without warning the crowd to disperse. Pandemonium broke and a lot of lives were lost. Ceasefire was ordered only after ammunition was exhausted. A lot of people died due to the stampede. Many lay injured and could not be moved as a curfew was imposed that day. They died later in the night. Lot of people jumped into a well in the garden to escape from being fired and lost their lives in the process. The well is now known as Martyrs Well and a plaque has been kept outside. Bullet marks can still be seen on the walls which have been preserved as a memorial.

The security forces of India and Pakistan perform a beating retreat ceremony every day before sunset. The flags of both the countries are lowered as part of this elaborate ceremony which involves a lot of dance like movements. The ceremony is quite a sight and an experience which is not to be missed. The rivalry between the countries can be felt while watching this. Loud patriotic music is played on both sides of the border and the crowds cheer. The immense patriotic feeling that one can get cannot be explained in words.

The ceremony starts with parades by soldiers on both sides and ends with the perfectly coordinated lowering of flags. One infantryman stands at attention on each side of the border. As the sun sets, the iron gates are opened and the flags are lowered. The flags are then folded and the retreat ends with a brusque handshake between the soldiers of  both sides followed by the closing of the gates. The soldiers who are part of this ceremony are specially trained for this purpose.

Food in Amritsar deserves its own special mention. It is a haven for all foodies, vegetarians and non-vegetarians alike. The locals claim that the special taste of Amritsari food should be attributed to the water of Amritsar and tell you many a story on how even the best of chefs taken from Amritsar cannot reproduce the same taste elsewhere! We even heard a story of a rich businessman from Amritsar carting truckloads of water from Amritsar to Delhi for his daughter’s wedding!

Below is a list of just a few of Amritsar’s marquee eat-out joints! These are places which we visited and loved! All of these are vegetarian friendly. Amritsar definitely warrants another visit, just for the food!!!

This small outlet is a good place for sampling the famous Amritsari Kulchas. The Kulchas are stuffed with Potato and served with Chana curry. Despite being stuffed, they didn’t seem too heavy. Most of the Kulcha places shut shop after late afternoon. So they have to be visited either for breakfast or lunch. 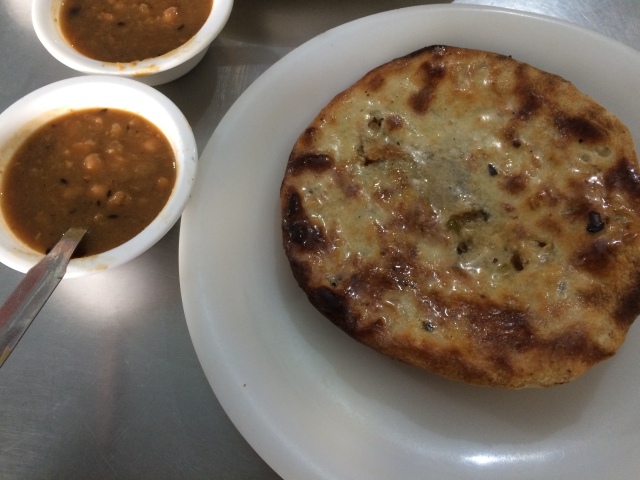 This restaurant has two branches and we visited the main one near the heritage walkway leading to the Golden Temple. The food was to die for! So different from the food that we had tasted before. We tried the Tawa Paneer which is one of their signature dishes and Maa Ki Dal along with some Tawa Chapathis. The meal was finished off with some Amritsari Phirni. A lovely way to end the day! 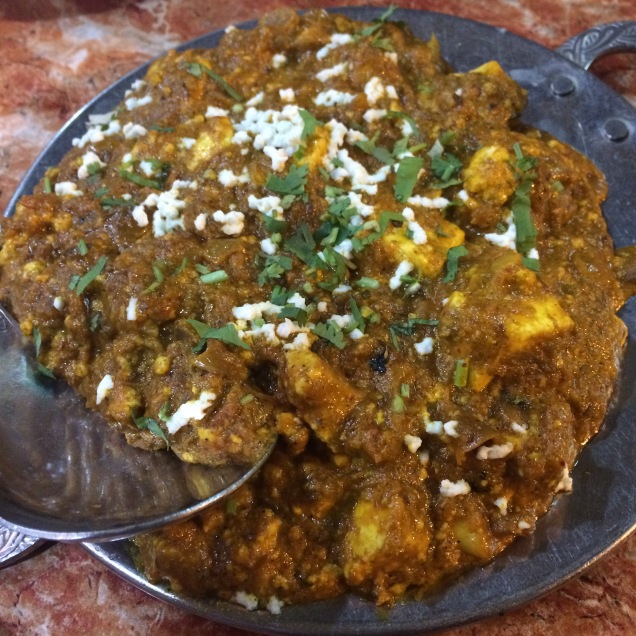 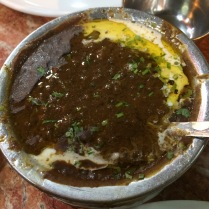 This legendary place for breakfast lived up to its name. We were not disappointed at all. As I write this, I am reminiscing the taste of the fluffy big Pooris and the delicious Chana curry as well as Kachaloo ki chutney (Colocasia Stem Curry) and Aloo ki Launji (a sweet and sour Potato curry). The Gur ka Halwa (jaggery based sweet) was a perfect add-on. When in Amritsar, we had every one of our breakfasts here!

Poori and Chana with Kachalu Chutney and Aloo ki Launji 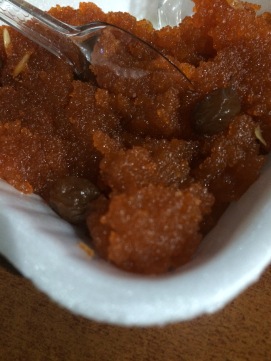 And how can we skip Lassi which is one of the must haves when in Punjab. We had already tasted it in all of the above places. But this hole in the wall outlet in the old city came recommended for its Pedewali Lassi. The sweet Malai Pedas are crushed and mixed while making the Lassi. What a heady combination this one was!

Paneer being cut to be sold at Gian Di Lassi

Punjab is famous for its intricate Phulkari embroidery and colourful Juttis. So these are a must buy in Amritsar. Some of the places that we visited for Phulkari shopping were Raja Exclusive in the crowded Katra Jaimal Singh market and Phulkari Creations in the upmarket Rani ka Bagh locality. 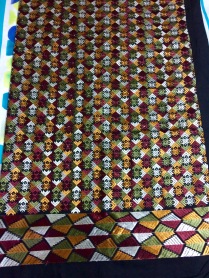 When it comes to Juttis the only name that sprang up everywhere online was Raunak Jutti. The shop had an amazing collection of Juttis across two floors and the staff ensured that we decided quick and got what we wanted. 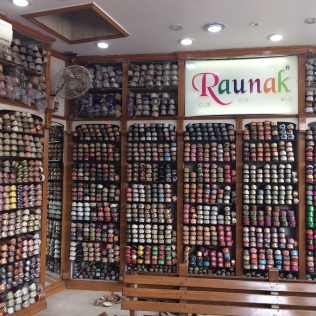 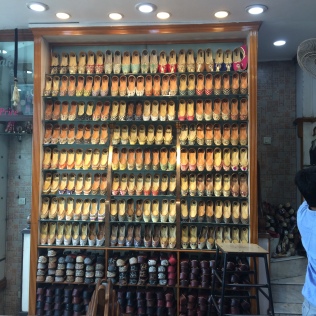 New Mahajan Store which sells dry fruits and papads came highly recommended. We tasted the Afghani Almonds called Mamras which are sourced from Kabul. The Amritsari Wadiyan and Papads can also be bought here.